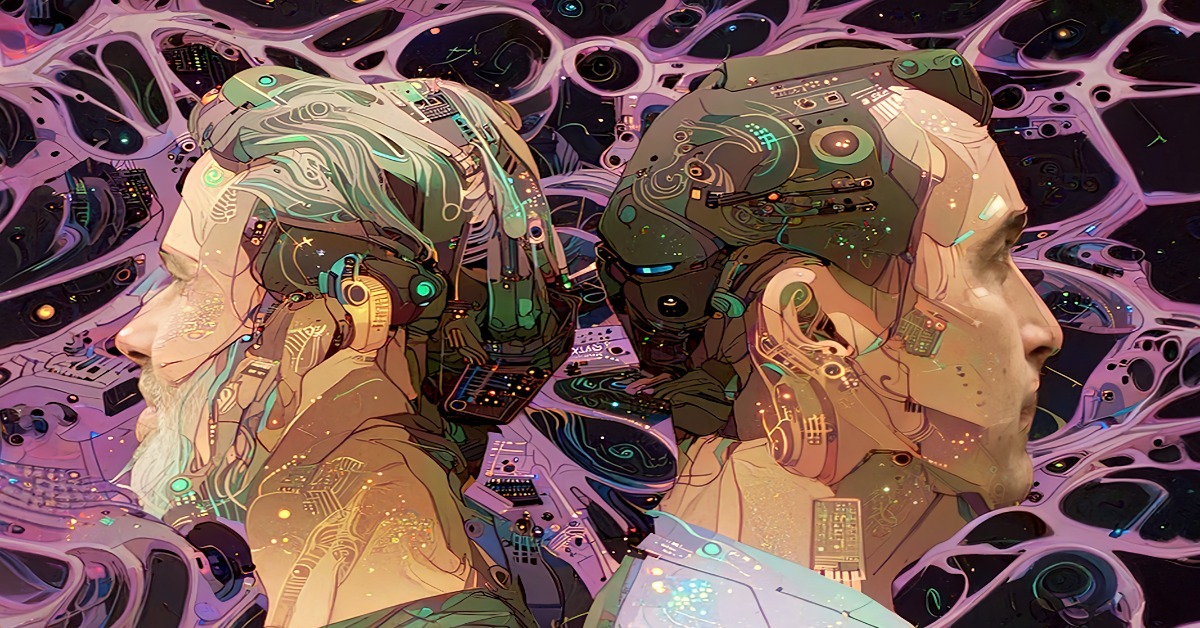 Plaid sit right at the very heart of global electronica. In fact there’s a very real sense in which Ed Handley and Andy Turner are the perfect encapsulation of what the electronic music of their generation was all about. As Plaid and as two-thirds of The Black Dog, they were central to the “Artificial Intelligence” movement of the early-mid 1990s: alongside their WARP stablemates Autechre, The Aphex Twin, B12 and allies like Richie Hawtin, Speedy J, Kenny Larkin, they brought new rhythmic variation, emotive melody and sensual textures to electronic music, creating a warm and welcoming counterpart to the white heat of the rave explosion.

But where the others would swiftly diverge and head off in many creative directions – into increasing abstraction or intricacy, or back towards pure techno – Plaid were the ones who stayed truest to the musical values they started out with. Their sound palette has got broader over the years, their techniques more sophisticated, they increasingly incorporate “real” instruments – especially with their ever-closer collaborations with multi-instrumentalist Benet Walsh – but over the years and right up to the utterly gorgeous new album The Digging Remedy, their focus has remained the same: intricate but always grooving rhythm, immersive listening experience and melodies and sound design that connect direct to the emotional centres.

The pair, and Ken Downie with whom they formed The Black Dog, were initially inspired “first of all by hip hop and electro, then later by the techno, house and acid we heard coming from the US” We were motivated to write because the music we liked was difficult to find at that point. We listened to cassette compilations and shared US import vinyl bought at places like Blackmarket and Groove Records in London”. Indeed, their earliest releases from 1989 onwards – which now fetch eye-popping sums second hand – are hip hop as much as they are techno or electronica. And like so many hip hop beat heads, they got immersed in the crate-digging game, seeking new and obscure vinyl to sample for beats, and as a result very quickly got a schooling in jazz and funk. This too is instantly audible in their work: from the beginning they had a swing and roll to their rhythms, and a narrative complexity to their chord and melody patterns that made them stand apart.

For all that this music was intended for close listening (the computer art of an android enjoying a smoke and a Pink Floyd album on the cover of the first Artificial Intelligence album in 1994 made that clear), it was not an alternative to club music. Quite the opposite, it was very strongly rooted in the dancefloor, and the scene around British electronica was a social one, with a supportive scene involving not just the WARP artists but acts like Coldcut, Orbital, Bandulu, The Orb, Future Sound Of London and an array of spaces both legal and illegal to play in. Ed and Andy’s clearest and best memories of the time are of clubs and live shows: as they say, “Mindset and setting has a huge impact on the way music is experienced. Often a track will vividly evoke a moment in time far more than a picture of an event.” And although they’ve played many huge shows over the years, their musical hearts are still in small clubs like the Bass Clef in pre-gentrification Hoxton, or Club 69 in Paisley on the outskirts of Glasgow, with “artist and audience on the same level, people not even bothered about the performer, everyone just enjoying the music and the night.”

Plaid as a duo and The Black Dog as a trio existed concurrently, indeed blurred into one another on the legendary Bytes album and elsewhere, until 1995 when Ed and Andy decided to focus entirely on Plaid. Up until that point, despite their prodigious output and cult status, music had ultimately been a hobby, a way of making the sounds they wanted to hear – but from here on in, the scale and pace of their activities stepped up a gear. Being asked to support Björk on an Asian tour in 1996 gave them an immense boost, and confident in the support of WARP to treat them as an act with a viable career, they spread their wings and really became the entity they are today.

While the scene around them was twisting into ever-new forms, and in particular the fiddly intricacies of IDM started to risk heading into cliché, Plaid remained true to their love of song and groove, and though they were as in love with the possibilities of technology as any of their peers, for them it was always a tool to support the music, not vice versa as in many cases. Regular collaborations with unique singers like Björk and Nicolette, and frequent remix work for the likes of Goldfrapp and Herbert only strengthened the duo’s own sense of song structure, and their gigging increased, keeping them constantly in touch with their audience and the possibilities of live performance.

That work rate has not let up. In the 2000s they increasingly worked on film soundtracking, with their scores for Michael Arias’s Tekkonkinkreet and Heaven’s Door becoming among their best-loved releases. This tied in with a strong visual aesthetic that has always been part and parcel with Plaid’s output – whether in artwork, videos, or on-stage projections, which they two feel are vital to what they do and have evolved along with the available technologies. Indeed, their next tour is set to involve them ‘playing’ a visual sequencer, with custom screens built for three-dimensional image mapping, and they speak excitedly about the possibilities of working with virtual reality. Whether as DJs or a live act, Plaid still play 40 to 50 shows a year, and everything they do is tested in this demanding atmosphere.

If anything, in fact, they’ve stepped up the pace even more lately, and their cross-media and technological collaborations are becoming more diverse. There was the material written for the robotic orchestra Felix’s Machines at Workshop InFiné, Normandoux in 2014 with Felix Thorn, and performed at the Tate Modern in London last year. Also last year they wrote a three track EP entirely on the Elektron Analog Rytm beat machine and sold in aid of MacMillan Cancer Support. They were involved with the development and launch of Mogees – the electronic trigger that can turn any device into an instrument. They soundtracked a level on the Little Big Planet 3 game. With The Creators Project, Nexus Interactive Arts and director Evan Boehm they worked on sound for an original interactive film experience, The Carp and the Seagull. And so it goes on, but always with their constant studio experimentation driving everything.

Which leads us to The Digging Remedy. All the elements that first inspired Ed and Andy are there – ecstatic Detroit chords in “CLOCK”, a brilliantly swinging hip hop beat in “The Bee”, Kraftwerkian electro jitters in “Saladore” – but everything is bigger and broader in scope, more luxuriant, more gleaming with detail, and there are fascinating new additions. The synth chords of “Melifer” and “Wen” engage in counterpoint with acoustic guitar ripples that sound almost New Age. A spiralling, unfolding flute melody in “Lambswood” creates a downright mystical air, like you’re hearing a shamanic ritual from a lost continent. But though the production values are the very highest, none of this is slickness or high drama simply for its own sake, and never do Plaid engage in the crowd-pleasing vainglorious stadium bombast that is all too common in electronic music now. Of course they don’t – as they say: “in our opinion it should be the artists leading the audiences, not the other way round”. That’s something that could stand as Plaid’s motto, and the thing that’s kept them so very fresh over all these years, even as their aims and values remain just what they were at the start.