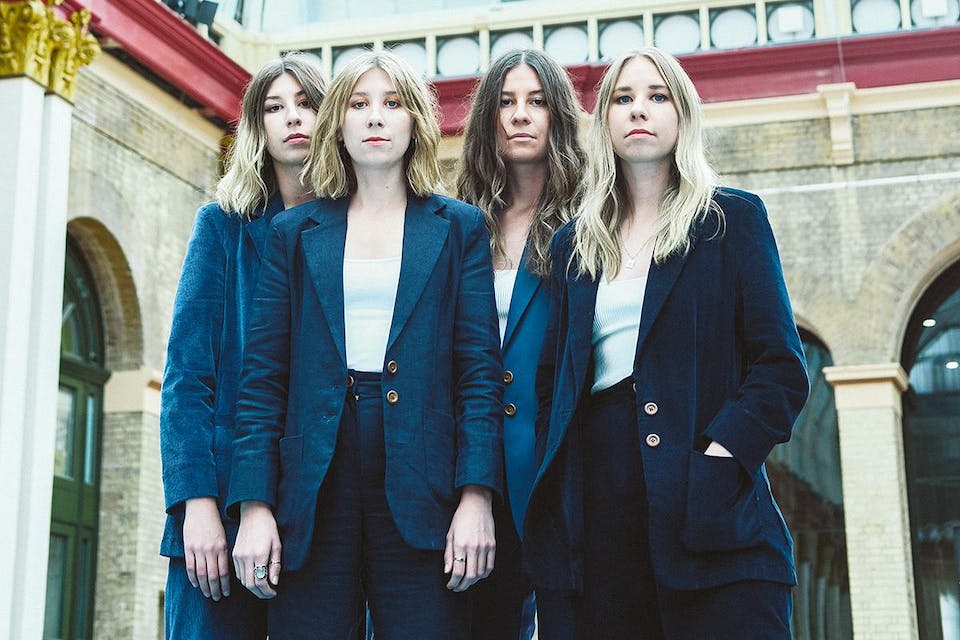 From practicing in their family shed as teenagers in rural Australia, to touring the world with Fleetwood Mac, Black Rebel Motorcycle Club, King Tuff, and King Gizzard, it’s been a strange trip for the four Findlay sisters. As Stonefield, they’ve got three albums and thousands of miles under their belts, plus plenty of perspective on what it’s like to fight to make a place for themselves, and tell their own story.

Written largely on the road in America earlier this year, the songs on BENT are filled with reference and reflection—the kind that comes from months spent far from home, living on four wheels. The surreal isolation of trudging through white-out snow and snaking down deserted highways served as the perfect backdrop for the band to look inward, taking stock of the journey they’ve taken thus far as musicians, and as people. “It’s a culmination of experiences, emotions, and stories collected over time,” explains lead singer and drummer Amy Findlay, “A growth of honest, raw, energy that has been burning within us and waiting for its moment.”

Recorded in just five days with Joe Walker and Stu Mackenzie from King Gizzard at their studio in Melbourne, the album is almost 100% live. Besides being an impressive feat and the flexing of a confident band operating at the height of their powers, that immediacy lends the album a distinct, crackling energy—thunder, lightning, and muscle-bound horsepower. “Sleep” opens the album with guitars covered in five inches of sludge and distortion and something that sounds like a far-off siren, or the high-pitched howling of the wind. It serves as a warning, a call to arms, kicking things off with a next-level version of the massive, unholy racket the band has become known for over the course of their last three albums.

The sonic inspiration taken from listening to Black Sabbath, Beak, Deep Purple, The Alan Parsons Project, and Mike Oldfield inject BENT with its sternum-shaking heaviness and ever-present swagger, but also its exploratory fearlessness—letting the songs loose to twist and turn, sticking to no one’s rules but their own. Take the proggy, keyboard-soaked intro at the top of “People,” or the cheeky combination of tinnitus-inducing hard rock and hip-shaking boogie at the core of “Dead Alive.” “Don’t make me think I’ve lost control / I know exactly what you said / Don’t make me think it’s in my head,” Amy sings during the latter, keeping the lyrics as defiant as the music.

“The album is about our own experiences and stories,” explains Amy, “Songs about the fear of walking home alone at night, stories of what it’s like being an all-female band and the power of supporting one another.” With that being the lyrical subject, the music that came out is definitely our heaviest.” It’s clear that darker thoughts were on the Findlay sisters’ mind— “Route 29,” with its suspenseful synth intro was inspired by the creepy The Route 29 Stalker podcast the band was listening to as they drove the namesake road on their way to a gig with King Tuff, and the cascading synth line and slinky restraint of the hi-hat on “If I Die” can only distract so much from the song’s terror-stricken lyrics.

It’s on the album’s last two songs that the band makes their strongest statement, using “Shutdown” to explore the doubt and search for validation that comes from moving and working within an industry that often makes the band feel like outsiders, lacing lines like “Is it easy for you living / When you don’t have to prove your meaning” in between a battle-cry chorus and detonations of guitar and keyboard. And “Woman” takes it to the edge with a chorus of “I am enough / I am woman,” spelling it out for anyone that hasn’t been paying attention.

BENT has all the chills and spills you would expect from an album that mines inspiration from some of the darker experiences of being misrepresented, belittled, and underestimated. By taking control of the narrative, and pumping it up with stack-blowing, guitar hero riffs and razor-edged vocals, it becomes an album of power, control, and confidence—projected in the face of a world that too often forces the opposite.

For those unfamiliar with Hooveriii, the vibe is that of a driving, psychedelic space rock band, with enough shred-laden, dual-guitar work to impress the heads and more hooks than a Peter Pan (pirate?) convention. This batch of songs blends sweetness and crunch better than your favorite breakfast cereal and the effect lasts longer too. One listen and you’ll have these melodic riffs and caloric choruses buried in your mind grapes so deep you’ll need to have them surgically extracted. If you enjoyed the songs Bert wrote for Mind Meld, you won’t be disappointed by the penmanship Hoover has brought to the table here and there’s even more sonic layers to sink your canines into. It’s not surprising that this version of the band has stuck longer than any other and they’ve already shared stages with Oh Sees, Kikagaku Moyo, Fuzz, Acid Mothers Temple, & more. Soon enough, you’ll be seeing them at the top of the bill, blowing the minds of everyone within earshot.