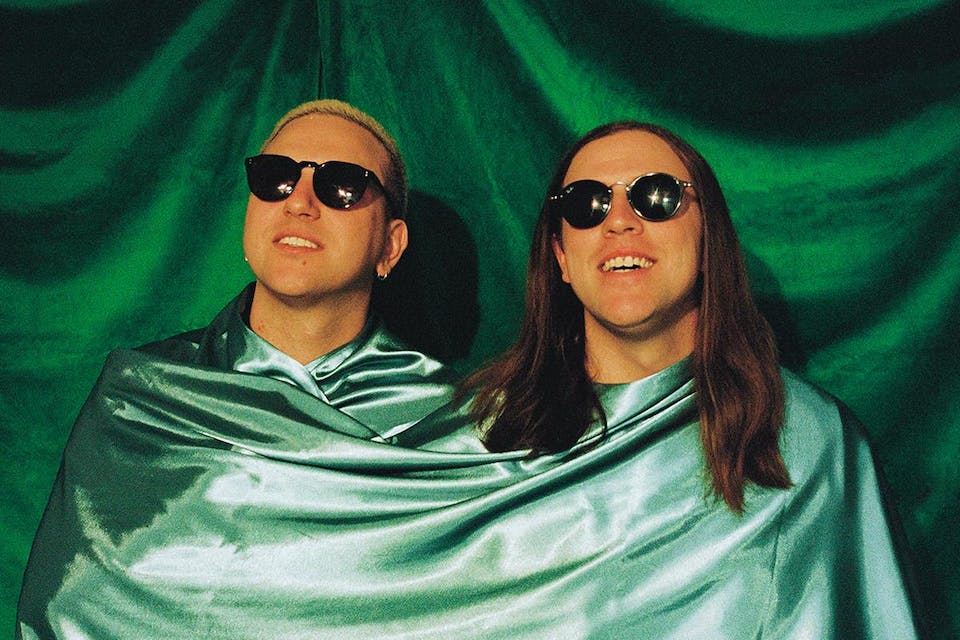 Jesse Clasen and Jacob Rabadi are ready to get inside of your minds. The duo call themselves Foreign Air and are a different breed of cat from all the other acts that are out there. The two currently split their time between Los Angeles (Clasen) and Washington DC (Rabadi) – initially establishing their friendship while playing in different bands. “One night, I watched Jesse perform and I was really intrigued by his voice and some of the stuff he was doing. We kept in touch and got to know each other over the years. We became really good friends.” Jesse followed up by saying, “With Jacob, we played just one show and it went really well. We kept in contact with each other. Over the years, it just developed into a friendship. We shared music online through Dropbox. Whenever I was in D.C. playing with different bands, he would come and hang out. Whenever he was around my area we would go to shows together. Sleep on each other’s couches. This project just kind of happened. I don’t think it was planned at all.” Coming together as Foreign Air has been a life-changing experience for the duo. Jacob notes, “For me personally, putting out the first song ‘Free Animal’ on SoundCloud has changed my life in a really big way. Prior to that, I came from more of a live music background. Playing different live music instruments. We are into rock music and hip hop. A lot of different genres that you wouldn’t think go together. Jesse adds, “This project has been a lot about using new tools and really diving into it. We are taking that whole mindset of songwriting from more of the ‘90s hip hop that we grew up listening to as ‘80s babies. Instead of finding records to sample, we are writing songs like we have always done with real drums, guitars and bass. Then we try to figure out how to chop it up and put them across pads and pitch them differently and see how a song can completely change. This is a new world for both of us.” The entire catalogue of music the duo have created together, including that first song “Free Animal” all the way through their most recent release “Wake Me Up”, has been streamed over 100 million times on Spotify and Apple. The music has soundtracked global advertising campaigns for Samsung, Nike, Vodafone, Microsoft, Hugo Boss and many other brands in addition to television features on Showtime, ABC, TNT, Vice and Fox. While it’s difficult to nail down the exact genre, Billboard Magazine calls the music “Transcendent Indie-Rock-Meets-Electronica with a penchant for forceful guitars and haunting vocals”. Jesse goes on to mention “Getting together in a room in my house and ironing out details and rearranging things. Then we took a hard dive all over the place from New York to LA to Washington D.C. to different studios owned by my friends. Different situations where we would look around the room and see what we could add to the songs. In some places it would be taking out a midi piano and replacing with a real grand piano that might have been in that specific room. Just trying to tie it all together with certain sounds. I think that might be something only we can hear. We started in the bedroom and took it around the country to see how it could develop. We would revert back if we didn’t like where it went. It was a very open process where we tried to make the best song that we can.” The party is only getting started for the guys as they have their sights focused on the road and new music.